Surprise performances and unexpected outcomes are anticipated each weekend in the wild world of college football. Even if everyone knows they are coming, guessing when and where they will happen is difficult.

Nick Saban will be extremely annoyed Saturday night. This is probably true most weekends his Alabama Crimson Tide play, but it will be especially true after the matchup with a Mississippi team now led by former assistant Lane Kiffin. Saban has never lost to one of his former assistants, moving to 20-0 after last weekend’s win over Jimbo Fisher’s Texas A&M, and that doesn’t figure to change against a Rebels team that doesn’t seem especially good on defense. But the early stages of the Kiffin era have shown that Ole Miss can put some points on the board and, because he’s Kiffin, the ex-Alabama OC is sure to have a few tricks up his sleeve for this contest. Alabama will win but it might cede more yards and points than we’re used to, which – combined with who would be responsible for that – is sure to leave Saban fuming at his postgame press conference.

STAFF PICKS: Predictions for Clemson-Miami and all other Top 26 games

Florida joins Alabama in handing Texas A&M a lopsided loss against a top-ranked conference opponent. In doing so, the Gators add to the scrutiny on Fisher as questions mount over how much progress the program has made during his three seasons. Maybe the questions are unfair in one respect: A&M is still building a roster with the depth and experience to contend for the playoff. But this is Florida coach Dan Mullen’s third season, too. Unlike the Aggies, the Gators have been rolling.

The Red River rivalry has been reduced to this: Two teams outside the Top 20, both coming off losses, but with two quarterbacks that rank in the top 10 in pass efficiency and passing yards per game: Oklahoma’s Spencer Rattler and Texas’ Sam Ehlinger. Who’s better? It depends on who’s hungrier. Oklahoma is 0-2 in league play for the first time this millennium, since before coach Bob Stoops arrived in 1999 to return the program to glory. This time the bet is on the redshirt freshman (Rattler) to beat the senior (Ehlinger) and the unranked Sooners to slug out of their slump to beat the No. 22 Longhorns. 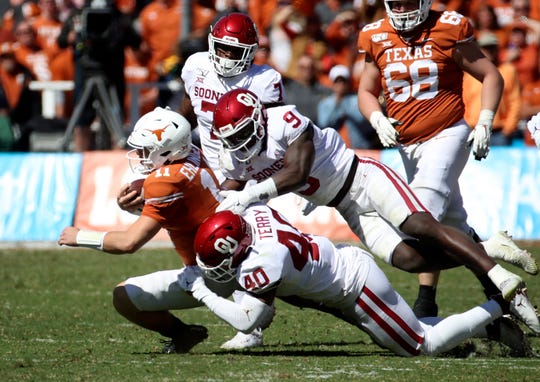 Texas quarterback Sam Ehlinger is sacked by Oklahoma’s Kenneth Murray and Jon-Michael Terry during the first half of their 2019 game at the Cotton Bowl. (Photo: Kevin Jairaj, USA TODAY Sports)

In two games under coach Sam Pittman, Arkansas has established itself as one of the most improved teams in the country, leading Georgia at halftime and then beating Mississippi State on the road. Things don’t get any easier this week for the Razorbacks as they head to No. 13 Auburn.

The Tigers will be smarting after their loss to Georgia. Their reaction can go one of two ways: Either they’ll be motivated to take our their frustrations on Arkansas or they’ll have an emotional hangover and let down against a perceived easy opponent. The latter happens on The Plains, making this a four-quarter game that goes to the wire.

The 2020 college football season was always going to be unusual. But the suboptimal early returns from Big 12 country that have effectively knocked the conference out of the playoff chase were nevertheless somewhat surprising.

But while the normally much-anticipated Red River showdown is not the top-10 clash we expected, it should still be fun. It probably won’t approach the level of wildness West Virginia and Baylor achieved in that 70-63 aerial show in 2012, but there are similarities. Simply put, it’s a battle of teams that like to throw the ball around but aren’t terribly good at pass defense. That has been a defining characteristic of the entire league, unfortunately for its national championship prospects, but at least we can be entertained.

So how will it go? The Longhorns have the more experienced signal caller in Ehlinger, and the Sooners’ inconsistent running game has contributed to their inability to protect double-digit leads in both their league losses. Logically, then, I should go with Texas.

But I’m not. My hunch is the game will come down to who does a better job eliminating mistakes, and I think that will be Oklahoma. Yes, the Sooners have dropped two in a row, but they won’t make it three.

It seems pretty crazy to pick against Clemson given that the last time the Tigers lost an ACC game was at Syracuse on Oct. 17, 2017. But all streaks are due to come to an end, and the reason Clemson will lose to Miami (Fla.) this weekend is simple: Energy. Clemson is a notoriously slow-starting team, and that has been evident even in the three victories the Tigers have posted this year. Dabo Swinney does not put the pedal to the metal for the first half of the season because he doesn’t really have to, as Clemson is usually good enough to win playing its B-minus game. But the Tigers have also gotten a little lucky in those situations (avoiding overtime against Texas A&M in 2018, coming back against Syracuse in 2019 without Trevor Lawrence, stopping a winning two-point conversion against North Carolina last year). Eventually, that kind of luck runs out, and this feels like a circumstance when a resurgent Miami is going to play its best game and Clemson might still be a little lethargic. If that’s the case, the Hurricanes are good enough to get the job done. The Tigers allowed 417 yards and 25 first downs to Virginia last week. With D’Eriq King at the helm, Miami is averaging 6.7 yards per play this season. If Clemson doesn’t bring it like it’s a playoff game, they’ll get caught this weekend.

real estate
We use cookies on our website to give you the most relevant experience by remembering your preferences and repeat visits. By clicking “Accept All”, you consent to the use of ALL the cookies. However, you may visit "Cookie Settings" to provide a controlled consent.
Cookie SettingsAccept All
Manage consent