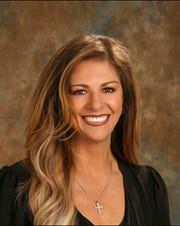 Incumbent Linda Thor is running for re-election for an at-large seat on the Maricopa Community Colleges governing board. (Photo: Michael Chow/The Republic)

The Maricopa County Community College District is one of the largest community college systems in the nation with 10 individually accredited colleges. (Photo: The Republic)

This year’s race for Maricopa County Community College District governing board is shaping up to be the most unusual in recent memory when it comes to campaign tactics.

First, opponents of candidate Shelli Boggs mailed flyers showing her holding an AR-15 semi-automatic rifle and alleging she was “forced out” of her job as a cosmetology instructor over complaints she belittled and bullied students. She denies the allegations.

Then, an internet domain name used by incumbent Laurin Hendrix expired and was taken over by his challenger, Jacqueline Smith, who began posting messages there, urging people vote Hendrix out of office.

The negative campaign tactics come amid a power struggle on the board that sets policy for one of the country’s largest community college systems. In the Nov. 3 election, four seats are open on the board but only two have challengers.

The seven-member elected board sets tuition rates, hires a chancellor to oversee operations for the 10-college system and has authority to approve an annual budget that can increase or decrease property taxes.

Here’s a look at the candidates:

Incumbent Linda Thor is facing challenger Shelli Boggs for a four-year “at large” seat, meaning any voter in Maricopa County may cast a vote.

Thor is a former president of Rio Salado College, an online school that is part of the Maricopa system. She worked in community colleges for 41 years, spending 29 of those years as a president or chancellor.

After retiring, Thor was elected to the board in 2016. She is running for re-election on a platform of experienced leadership, according to her campaign website.  At a recent candidates’ forum, she said her experience provides a different perspective that is needed on a board that often has “lay people who have not had very much direct involvement in these colleges and their mission.”

Thor acknowledges that the current governing board, “is the most partisan board I have ever seen, and it’s not good for us to operate this way.”

Thor is being challenged by Boggs, a former cosmetology instructor at the East Valley Institute of Technology.

Boggs was the target of a campaign mailer that showed a recent photo of her wearing a red tank top, mirrored sunglasses and holding an AR-15 semi-automatic rifle. The mailer reads: “Shelli Boggs couldn’t be trusted with children in a classroom. We can’t trust her on the Maricopa Community Colleges Board!”

Boggs told The Arizona Republic that the campaign ad is “full of untruths” and disputes that she has a history of conduct that makes her unsuitable to be around students. She said she resigned from her job after she was retaliated against by EVIT administration.

Boggs’ campaign website describes her as an advocate for students and education.

She said she became interested in running for the Maricopa Community Colleges board earlier this year after hearing about a professor at Scottsdale Community College who received death threats for teaching material that a student complained condemned Islam. After talking with a governing board member, she decided to see what she could do to help guide the college district.

Boggs is endorsed by U.S. Rep. Debbie Lesko and Nancy Salmon, president of Mesa Republican Women, and the Arizona Conference of Police and Sheriffs.

The Maricopa Community Colleges district is divided into five geographic districts for voting purposes.  Board member Laurin Hendrix is being challenged by Jacqueline V. Smith in District 1, which makes up the southeastern portion of Maricopa County.

Hendrix is a former Republican legislator who served in the House from 2008 to 2010. He owns a legal-services business and is a real-estate broker.

His campaign website describes him as a “fighter for the taxpayer,” who has worked to eliminate wasteful spending while keeping tuition low. Hendrix told The Republic he supports lower tuition, lower taxes and less bureaucracy. If re-elected, he wants to explore ways the community colleges can increase enrollment.

He was the driving force in 2018 behind eliminating a long-standing bargaining and pay negotiating process with college faculty called “meet and confer.” The board replaced it with a policy that recognized the governing board as the final authority on all policy matters.

Hendrix said the switch would allow changes to be accomplished more quickly while still allowing faculty to have a voice. But the decision to end meet and confer was challenged by the faculty association in federal court. When a new board majority took power in 2019, the lawsuit was settled.

Hendrix is being challenged by Smith, who is vice president of the ASU Foundation, the non-profit funding arm of Arizona State University. She is also a professor of practice in ASU’s Mary Lou Fulton Teachers College.

Smith said at a recent candidates’ forum that she decided to run for a seat on the board because she believes it’s essential for everyone to have access to affordable and excellent education.

She said she wants to ensure that the community colleges continue to be an essential asset and not get bogged down by partisan politics and turmoil. Smith said she was motivated to run for a seat when she realized the coronavirus pandemic would continue to create uncertainty for higher education.

Smith said she was curious about Hendrix’s platform so she looked up the internet domain name www.lowertuitionnow.com advertised on his campaign signs. She found the domain name was available so she took ownership and began posting information about Hendrix.

“It seemed like an opportunity to promote my campaign, and it seemed to really make my point that he’s not giving the attention to detail and focus to our community colleges,” she said.

Hendrix told The Republic he was unaware that Smith owned the domain name he had used in the 2016 board election. Hendrix said he re-used campaign signs this year from the ’16 election and was unaware the website listed on his signs hadn’t been kept active.

“I’m disappointed she didn’t have a little more class than that,” he said about Smith taking ownership of the domain name.

Two other seats are open in the upcoming election based on the geographic areas in which voters live, but there are no challengers, so those races are effectively cancelled, according to the Maricopa County Elections Department.

Current board member Tom Neriniin District 5 and candidate Susan Bitter Smith in District 2, have no challengers.

Nerini is a former college administrator and counselor in the Phoenix Union High School District.

Bitter Smith has a long history in public service. She was a member of the Arizona Corporation Commission and later served on the Scottsdale City Council and was vice mayor.

About the Maricopa Community Colleges: